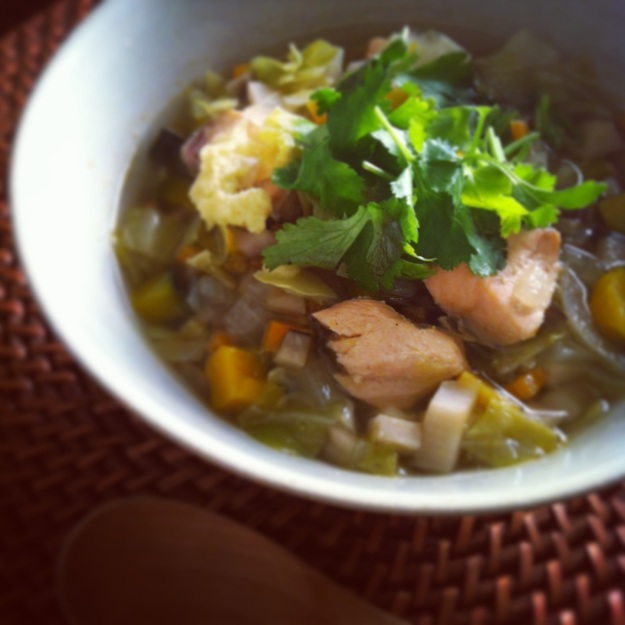 Not many people know this, but I am following Madonna’s footsteps in many ways. I mean, a few ways. Okay, maybe three. What I’m trying to say is I enjoy yoga (both actually doing it and the thought of doing it), own Tracy Anderson’s exercise DVD (very strange but surprisingly effective… a long story) and have been enjoying cooking from a cookbook by a Japanese Macrobiotic chef, Mayumi Nishimura, who was Madonna’s personal chef for a long time.

Without going into too much details as I’m by no means an expert in Macroiotics – I have always been in general agreement with its concept of eating seasonal local produce and less processed foods, not necessarily because they are healthier but because I think they taste great that way. Plus I adore M cafe, one of well-known Macrobiotic establishments in Los Angeles, and used to go there for lunch quite often while I worked in Culver City. So when I got a new job in the valley, I thought I would try cooking some Macrobiotic foods myself.

I made various dishes from this inspiring book, but probably cooked this recipe most often. It is a total comfort food for me with some of my favorite sweet & crunchy Asian vegetables such as kabocha squash, lotus root, burdock – HEAVEN! I tend to use even less than four ounce of salmon per serving and am always surprised how the small amount goes a long way, maybe because the particular combination of the veggies provides such rich and fun texture and flavor to make the dish so satisfying. Ginger & cilantro add a nice kick and warming finish as topping, too.

Burdock root (gobo in Japanese), if you are not familiar with it, is a delicious root vegetable that is tasty seasoned with traditional Japanese salty-sweet flavor (soy sauce and sugar) and absolutely wonderful in soups. I recently discovered it is also gorgeous grilled or braised with olive oil, garlic, and balsamic glaze drizzled over at the end. Don’t be turned off by its rugged “tree root” look – Just scrub off rough spots with firm brush under running water and it’s ready to go. If it is good enough for Madonna, it’s good enough for you.