I’m a Trader Joe’s kind of gal but there are two reasons I go to Whole Foods Market for. One is a bunch of organic carrots that still have green top (I discovered carrots greens a while ago and it is utterly, utterly delicious) and the other is dinosaur kale. Strongly flavored and textured kale is my favorite out of all dark leafy greens and I do love common, curly kind. But some recipes like this one call for crinkly dinosaur kale which is a bit softer and milder.

The only problem is that I seem to be able to get them only at Whole Foods. Even my trusted Asian and Middle Eastern markets that usually carry every obscure vegetable don’t seem to have this type of kale regularly. Suppose I could just include Whole Foods in my weekly grocery shopping route to spend every Saturday afternoon driving around the valley to get what I need for the following week. I would, for this salad. But I had the strategy last year.

I planted dinosaur kale seedlings along with other summer crops in my backyard in early spring. Long after my yellow wax beans and tomatoes are gone, they are still producing small but steady yields, now with winter harvest of citrus fruits. What makes it even more amazing is that I’m hardly a good gardener. And by that I mean I’m terrible. No matter how hard I try every year, by mid to late summer, my yard usually ends up becoming a jungle where the rule of nature prevails and only the strongest would survive. Tomatoes were a spectacular winner this past summer. But here we are, in January, dinosaur kale is still winning quietly. And still saving me a trip to Whole Foods. 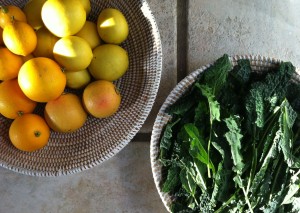 Now, about the dish (finally!) – I found this recipe when I was trying raw food diet a couple of summers ago. I wasn’t going to stick with the diet but was just curious what people would eat when you can eat only raw foods, and actually quite enjoyed the fresh and light fare as well as clean kitchen throughout the whole summer. I eventually stopped my trial as I missed warm foods when the weather got colder (Yes, it DOES get chilly in LA – You know, like, 60s) but liked some recipes a lot and continued to cook with them. This is one of such recipes.

Of course the combination of soy sauce and avocado can NEVER go wrong as far as I’m concerned so I knew I would like it (I need to save discussion on my complete addiction to avocado some other time – It will be lengthy). The only variable was raw kale, which I never tried, and I was still apprehensive while chopping the leaves as they seem too hard and bulky to eat as is. But after marinated in salt and lemon juice, they certainly did get wilted and soften with its earthy and slightly peppery flavor intact, which is a perfect match with mild, rich avocado.

Now that I’m no longer on raw food diet, I usually pair this with cooked quinoa and creamy soup made of pureed vegetables for an ultimate feel-good meal. It will make you feel so healthy that you will break out into downward dog after you eat it. Seriously.