Recipe with more sensible amount of toppings from:  Sunset Magazine (on myrecipes.com)

I was cutting into one of these squashes when my roommate Kerry walked into the kitchen.  “Hey there!  Oh, what kind of squash is…*GASP*  Is it… Is it THAT one?”

Yes, Kerry. It’s THAT squash – It’s that squash I became completely obsessed with last year.  It’s that squash I planned the whole Thanksgiving dinner around, then disappeared from the face of freakin’ planet a week before, which sent me to frantic trips to 3 Trader Joe’s, 2 Whole Foods and 1 Sprouts on one desperate evening.  It’s that squash I then ended up finding at Vons nearest my house (don’t ask me why) and kept secret stash of throughout winter by returning to the store weekly and digging through that big barrel of mixed harvests until I bought every single one that was sold.

It’s delicata squash.  It is back in my life again.

This bad boy of a squash is sinfully sweet and creamy (like butternut, but even sweeter and creamier) and you can eat it without peeling (like kabocha, but the skin is thinner). Its sweetness gets even more intensified when roasted, and it is delicious as is or in salad – but with a little bit of butter and honey, as well as toasted pepitas and juicy pomegranate seeds sprinked over, it is practically a dessert that tastes as gorgeous as it looks.

If you haven’t had them yet, I urge you to get some immediately, like today. Unless of course you live near me, in which case please get your hands off my share. 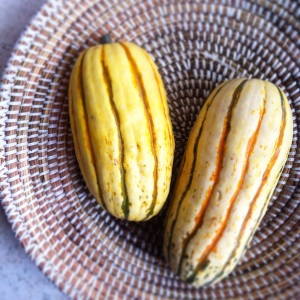 I strongly insisted that everybody try these squashes last year, so even my sister in Germany excitedly called me to let me know she found them except that what she described to me was not at all delicata squash.  Sis, THESE are delicata squash just so we are clear.  I don’t know what you fed your kids with and don’t want to be responsible.

Original recipe called for more butter, and actually suggested to melt it and mix with cayenne to serve on the side like sauce so guests can drizzle it over squash themselves. I found it equally delicious with much less amount of butter dotted and melted over squash directly and am settled with this way.